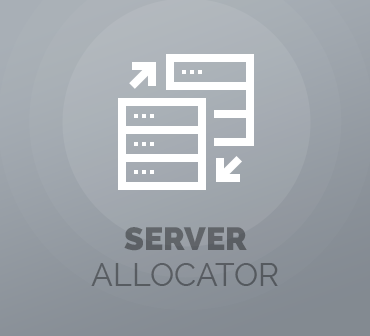 Server Allocator For WHMCS will automatically match the most suitable servers to your clients' products when placing orders in your system. The module will let you create and configure your own switching rules, split them into groups, and assign servers and product groups to them. Each rule is based on chosen configurable options, product addons and custom fields. This way you will be able to assign the products of your clients to different servers according to options and values chosen by them while ordering. These can be preferred location, required disk space, number of CPUs and many more.

The possibilities of server assigning rules are endless and limited only by your imagination. With our module, a client who orders a product with e.g. an additional addon can be assigned to a different server than a client ordering the same product but without the addon. You will be able to freely mix and combine the rules to allow your customers order personalized products created on the most suitable servers. What is more, you will be enabled to create preconfigured products and share the links to them with your clients!

Server Allocator For WHMCS will create a win-win situation for both you and your clients. Order our module today to maintain full control over your server infrastructure and meet even the most picky expectations of your customers.

Provide VPS and dedicated servers offered by OVH, and empower clients to control the purchased machines, access the KVM and IPMI console, manage snapshots, and more.

Grant your clients permission to create and freely modify multiple virtual servers within imposed resource limits plus enable them to manage all server components remotely.

Alter Proxmox Cloud servers in line with their current load automatically using the method of server resizing or cloning and let your customers manage all scaling rules.