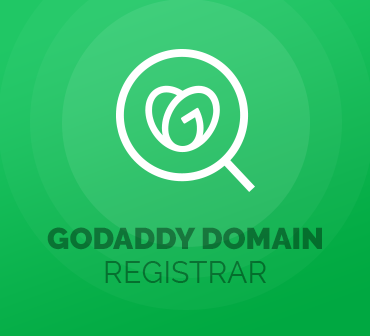 GoDaddy Domain Registrar For WHMCS is a module created specially for GoDaddy API Resellers to enable you to automate the provisioning and management of domains in your WHMCS system. With its help you will be able to set up your TLDs & gTLDs with just a few clicks to start reselling them to your clients straight away!

The module will allow your audience to check whether desired TLDs are available using GoDaddy domain lookup and browse domain suggestions offered by GoDaddy registrar. Furthermore, domains and DNS records owned by your customers can be managed in a convenient manner right in your WHMCS client area. At the same time, you will be able to view detailed status along with action logs of domains, as well as toggle ID protection for each one of them separately. What is more, there is an option for mass enabling/disabling auto-renewals via SSH console.

GoDaddy Domain Registrar For WHMCS brings new opportunities you cannot miss! Extend your offer and improve your customers' experience in one fell swoop!

The module is updated and developed in cooperation with GoDaddy Operating Company, LLC.

Extend instruments for domain ordering in WHMCS to perform bulk changes on TLDs and let your clients use custom order forms with categorized TLDs and domain spinners.

Create fully customized pop-ups presented as an image, raw text or HTML in your client area, select their recipients, define time frames and exact pages to be displayed at.

NIC IT Registrar For WHMCS

Implement the automation of .it domains reselling and management in WHMCS plus offer your clients the freedom to personalize each order and handle renewals of TLDs.

Introduce automation of provisioning for Hetzner servers, allow clients to adjust the status of ordered machines, as well as enter the remote console from your WHMCS.