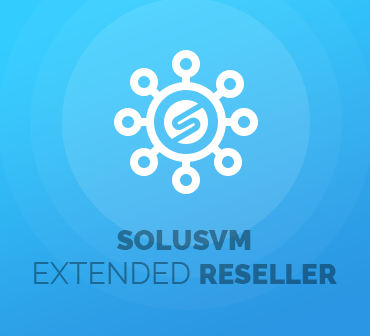 SolusVM Extended Reseller For WHMCS is a great solution for every SolusVM server owner who has resellers. This module will allow you to automate the creation and provisioning of complete products to your resellers. Such products include specific server resources which can be further sold to clients of your resellers. Simple and efficient!

The module works in a very intuitive way. The first step is preparing packages with server resources like the available number of users, the number of virtual machines or the amount of disk space. Then you can start selling those packages to your resellers who will offer included resources to their own clients. All these happen inside your WHMCS!

Do not hesitate any longer, SolusVM Extended Reseller For WHMCS is a fantastic way to reach new clients, find additional ways of distribution and increase your sales!

Automate the supply and careful oversight of virtual machines in WHMCS and empower your clients to remotely handle servers, access various consoles and more.

Set switching rules based on configurable options, product addons and custom fields to automatically match the most suitable servers to products ordered by your clients.

Allow resellers to offer your products under own brand, manage acquired customers and earn profits for each sale plus let end clients handle key aspects in your WHMCS.

Enjoy the automation of GoDaddy TLDs and gTLDs provisioning plus allow your clients to handle DNS records, nameservers and other details without leaving your website.